The highlights of Black Burn

Creating a powerful fat burner sounds easier than it is. It’s not so much about the ingredients in each capsule, it is mainly about the quality of the extracts (the amount of active alkaloids) in conjunction with administering the right ratio per ingredient. Where other manufacturers develop a formula on paper, we go much further than that! Stacker2 Europe invests enormous amounts of time and effort in fabricating extracts that have up to three or four times higher doses of the active alkaloids per gram. Once the formula has been developed it is tested comprehensively both for the part that you can feel (the energy boost, the suppression of hunger pangs) and the ultimate objective of the product: to stimulate fat burning.

Before our Black Burn was launched on the market, three studies were set up to test the formula’s effect under practical circumstances. The first two studies were used to implement a step-by-step optimization of the formula. The third study is what it’s ultimately all about: the results when you step on the scale! Who participated in this study? Fifteen men, all of them fanatical strength trainers, aged 19 (the youngest) to 42 (the oldest). All participants came out of a bulking-up period and wanted to get drier and burn fat for the start of the season just ahead. Five participants (the first group) used Black Burn for 40 days by taking two capsules three times a day. This was combined with a normal diet and a training program that is used for bodybuilders. The only supplementation allowed was a maximum of 100 gram of protein (using 100% Whey shakes). The second group had the same diet and training program, but took a different brand of fat burner. The third group did not use a fat burner at all. The study was monitored by a team of two physicians, a dietician and a personal trainer.

A picture is worth a thousand words, which is why you can see below the results achieved by each group. Please note: the overall BMI remains relatively high because bodybuilders have so much muscle mass. This is why the fat percentage is more relevant than the BMI.

The big difference between Black Burn and other fat burners

As we explained before, the strength of an effective fat burner lies in the quality of the extracts and in finding a composition that optimizes the ratios between the ingredients. Over the course of the past 10 years, we have accumulated enormous amounts of knowledge and applied this in our Black Burn formula. As an example, let’s take a relatively simple ingredient like caffeine. By taking 150 mg of caffeine several times a day you can increase your fat burning by 30%. But if you were to add 300 mg of EGCG (from green tea) and just a touch of vitamin B12, you will give your fat burning efforts an extra boost and fat is burnt 45% more effectively and faster. To illustrate what this means, this translates into an additional 240 calories of fat burnt per day, which is an extra kilo of lost fat per month. This additional fat burning is achieved purely by using ingredients in the right way. With our Black Burn your fat loss could go up to 8 kg per month.

If you want to lose those excess kilos and look super dry and cut, be sure to choose the strongest and most effective fat burner on the market today. Try our Black Burn! 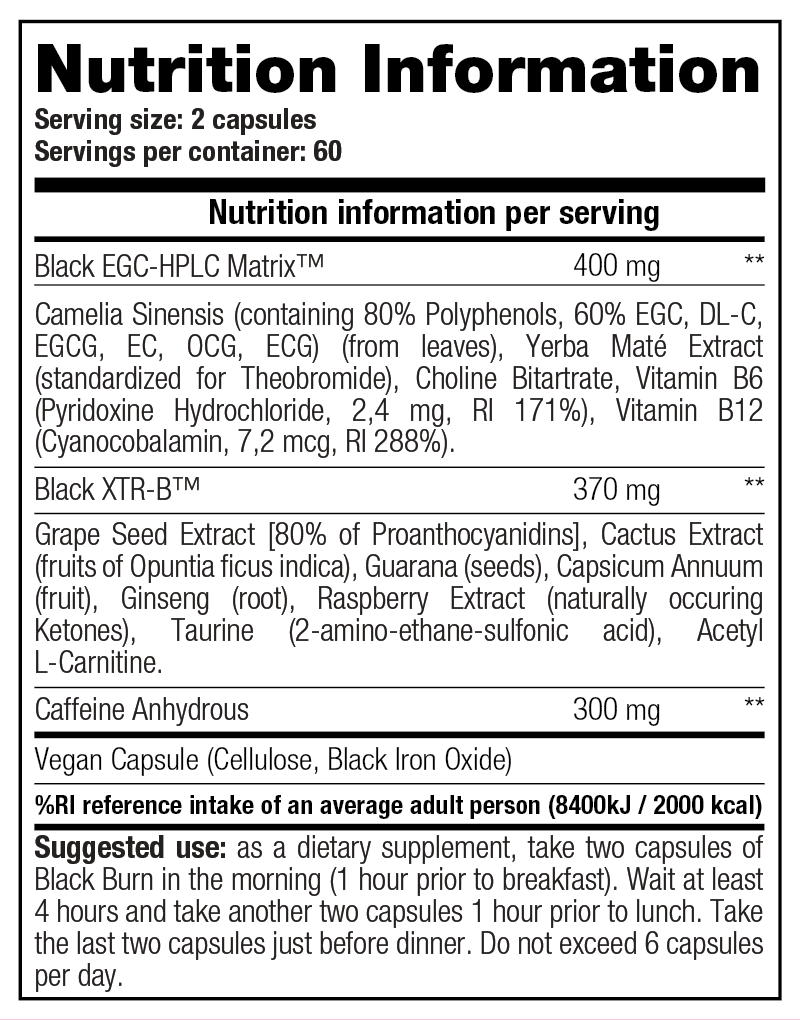